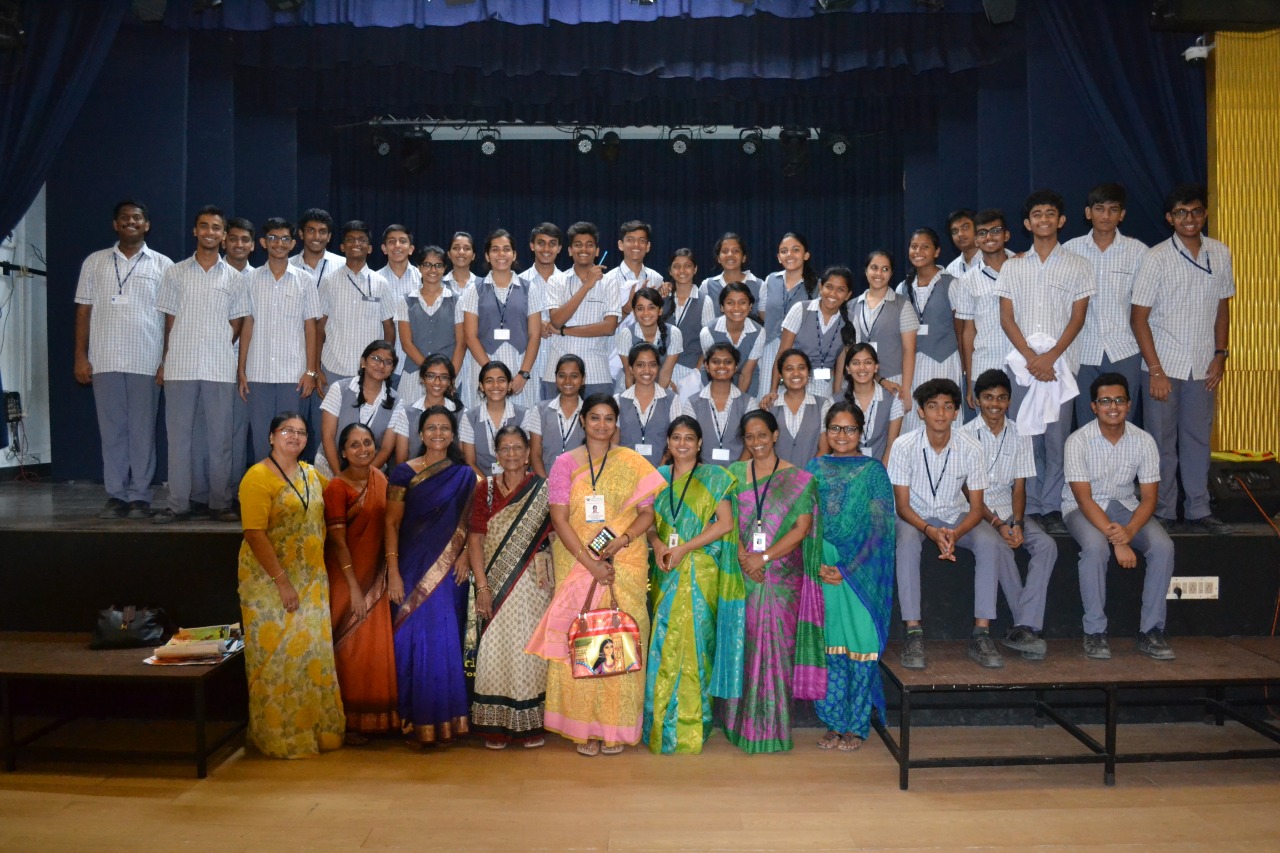 Palliative medicine is a new speciality in India and there are very few trained professionals.One of our objectives is teaching and training as education of health care professionals is the essential first step in achieving our vision of making palliative care available throughout the state of Tamilnadu.

We conduct certificate courses and workshops for doctors and nurses and give talks inContinuing Medical and Nursing Education (CME & CNE) programmes. We also conduct workshops for social work students and volunteers.

Some of our regular programmes:

Two students of M.A. Applied psychology (with specialization in clinical psychology), Tata Institute of Social Sciences, Banyan Academy of Leadership in Mental Health (BALM), Chennai, interned at Lakshmi Pain and Palliative Care Trust, Chennai, under the guidance of Dr. Mallika Tiruvadanan and Mrs. Vijayalakshmi for 11days in semester I from August to October and 30 days in Semester II from November to March (2019-2020).

Two students from III BSc, Department of Psychology, Ethiraj College for Women, Chennai has completed her 30 hours Case study from November 2019 to February 2020 at Lakshmi Pain and Palliative Care Trust.

13 January 2020 – A student from MMM Nursing college did her project here in Lakshmi pain and palliative care by collecting samples via questionnaire from patient’s care givers.

December 2019- January 2020 – Two students from Department of psychology, Ethiraj college for women have done their internship at Lakshmi Pain and Palliative Care Trust

29, 30 and 1 December 2019 –  Contact session – ‘Certificate Course in Essentials of Palliative Care’ for doctors and nurses at Lakshmi Pain and Palliative Care Trust

7August 2019 – Mrs.Vijayalakshmi and Dr. Gayathri went for a workshop at NIIT

22 March 2019 –  Dr. Mallika invited as examiner for the Fellowship in Palliative Medicine Course at CMC Vellore

28 March 2017 – Talk by Dr. Mallika Tiruvadanan on ‘Pain Management in Patients with Advanced Dementia’ at a meeting organised by the SCARF, at Asha Nivas Social Service Centre, Chennai.

24 March 2017 – Talk by Dr. Mallika Tiruvadanan on ‘Head, Heart and Hands in Pain Management’ at a meeting organised by the Janssen and Janssen department at Hotel Ramada, Egmore.

22 March 2017 – External Examiner (since 4 years) to CMC Vellore for the Fellowship in Palliative Medicine – a 1-year residential program.

11 to 13 Feb 2017 –  Attended the national conference and presented posters on ‘Electro chemotherapy – a New Therapy’ by Dr. Asoke Mathew and the ‘Different Models of Providing Palliative Care’ by Dr. Mallika Tiruvadanan emphasising the need for networking of palliative care centres

18 – 27 January 2017 –  Faculty for the 10-day training of doctors and nurses from 10  Govt. hospitals across Tamilnadu for starting of palliative care department. This was conducted by the National Health Mission.

18 December 2016 –  Talk by Dr. Subathra on ‘Recent Concepts in Palliative Medicine’ at a meeting organised by the Anaesthesia Foundation at The Presidency Club, Chennai

12 October 2016 – Talk by Dr. Asoke Mathew on ’Inspiring Innovations in cancer Therapeutics’ and by Dr. Mallika on ‘Quality Living with Cancer through Palliative Care & Communication Skills” at the conference on “Novel Cancer Therapeutics and Rehabilitation – Exploring New Horizons” at the Kasturba Gandhi Nursing College at Pondicherry

26,27 September 2016 – Certificate course on ‘Role of Social Workers in Palliative Care’ for MSW students from the Madras School of Social Work at Lakshmi Sundaravadanan Hospital

11 Aug 2016 – Workshop and live demonstration of Electro chemotherapy for two patients at Lakshmi Sundaravadanan hospital under the guidance of Dr. Goran Heller from Sweden. It is an innovative technology which combines low dose chemotherapy and electrical pulses for relieving pain and other symptoms in localised superficial cancers. Doctors from various oncology centres participated (facilitated by Scandinavian Meditech)

20 & 26 April 2016 – Talk by Dr. Mallika on ‘Psychological Issues and Symptom Control’ for nursing students at RMD Academy for Health, Chennai

17 April 2016 –  Talk by Dr. Mallika‘Palliative Care for Chronic Diseases’ for doctors and members of the IMA, organised by the IMA at Hotel Savera, Chennai

19 Aug 2015 –  Talk by Dr. Mallika on‘Head, Heart and Hands in Total Cardiac Care’ in a CME on ‘Futuristic Medicine – Cardiology’ conducted by The Department of Education and Curriculum Development at The Tamilnadu Dr. MGR Medical University, Chennai

Our Interaction with the Department of Health, Government of Tamilnadu and Achievements with their support. Workshops held since 2003

Interaction with National Health Mission, (NHM) Chennai, Tamil Nadu: We were the invited faculty for all the programmes organised by the NHM

4 November 2019 – Dr. Mallika Tiruvadanan was invited as mentor for National Programme for Palliative Care – A Review conducted By NHM and WHO India.

3,4,5 October 2019 – Workshop on Palliative care and Pain Management at NHM. Dr. Mallika was one of the resource persons 11 Doctors from various districts of Tamil Nadu attended the sessions.

Faculty at the Conference conducted by the Indian Society for the Study of Pain (ISSPCON) between 6th and 8th February 2015 at Hotel Hyatt, Chennai:

22 Dec 2014 –  Talks by Dr. Mallika& Dr. Subathra on ‘Overview of Palliative Care and Chronic Pain Management’ at the monthly meeting for doctors at the Institute of Obstetrics and Gynaecology, Egmore, Chennai

26 July 2014 –  Guest lecture by Dr. Mallika on ‘Role of Counselling in Palliative Care and Pain Management’ for members of the Chennai Counsellors Foundation

26 Jan 2014 – Talk by Dr. Mallika on ‘Palliative Care’ in Chennai Pain Update -1, a CME programme conducted by the Indian Society  of Anaesthesiologists, Chennai City Branch at Hotel Accord Metropolitan, Chennai

14 Nov 2013 – Participation as Co-Chairperson by Dr. Mallika on ‘Interventional Pain Practice as a speciality’ in World Pain Symposium and International Conference of Interventional Pain Management at Oberoi Grand Hotels, Kolkata.

20 January 2013 – Talk by Dr. Mallika on ‘Introduction to Pain’ at the Inaugural Conference of Tamilnadu Chapter of ISSP, (TNPAINCON 2013) at Government Rajiv Gandhi General Hospital, Chennai

17 April 2010 –  CNE – ‘Role of Nurses in Palliative Care’ for Nurses at Govt. Rajiv Gandhi General Hospital, in collaboration with Dept. of Surgical GE and NRHM, Govt. of Tamilnadu

18 July 2009 – Talk by Dr. Mallika on ‘Care Beyond Cure’ at the CME on ‘Palliative Care in Cancer’ for doctors at Cancer Institute, Adyar, Chennai

08 November 2008 – Talk by Dr. Mallika on ‘Pain and Beyond’ & Dr. Subathra on ‘WHO Ladder’ at the CME programme on ‘GI Cancers – Total Care’ conducted by the Dept. of Surgical Gastroenterology, Govt. General Hospital, Chennai

18 February 2006 – Organising Secretary of The 13th International Conference of the IAPC (Indian Association of Palliative Care) at Hotel Savera, Chennai.

08 August 2005 –  Conducted the ‘Six-Day Foundation Course in Palliative Care’ for Govt. doctors from 14 Medical College Hospitals, sponsored by the Dept. of Health Govt. of Tamilnadu. Mr. N Thalavai Sundaram, Minister for health and family welfare, Govt. of Tamilnadu gave the certificates at the valedictory function

01 February 2004 – Invited as WHO Resource person in Raipur, for a CME on Palliative Care.

Academic Involvement and Contribution for the Development of Palliative Care The Tamilnadu Dr. MGR Medical University

Palliative care is much needed but < 1% has access to palliative care in our country. We conduct regular awareness programmes for the general public and health care professionals so that people with need will get the necessary help.

12 October 2019 –  Awareness Session conducted at Adambakkam on account of World Hospice and Palliative Care Day (WHPCD) by the Volunteers for the Magalir Kuzhu team from that locality.

25 September 2019 –  Dr. Mallika and Dr. Senthil invited as Guest for a talk program on “Cancer and Palliative Care” at Mobile Tutors Pvt. Ltd.,

17 November 2016 –  Talk by Dr. Mallika on ‘Palliative Care – an Insight’ at the inauguration of Project Mythri, Anna Adarsh college, Chennai

27 April 2016 –  Talk by Dr. Subathra on ‘Cancer and Palliative Care’ for the employees at the AGS office, Teynampet, Chennai

11 July 2015 – Addressed the high school students, teachers and parents and spoke to them on – ‘Cancer – Cure and Care’ at St Thomas Matriculation School, Thiruvottyur, Chennai

06 Mar 2015 –  Komali Mediclown Academy, Pondicherrycollaborated with us and gave a talk on the role of Medical Clowning at our hospital as part of the week long Auroville Festival. Professors and students from WCC, Ethiraj College and MSSW attended

11 October 2014 – The Role of Clowning in Palliative Care, a talk by Fif and Hamish of Komali MeDi Clown Academy for the general public at Lakshmi Sundaravadanan Hospital in view of WHPCD

28 Jun 2014 –  Talk by Dr. Subathra on ‘The Role of Palliative Care for People with Chronic Illnesses’ for care givers of patients with long-term diseases following which Mrs.Vijayalakshmi conducted a session on relaxation to help caregivers cope with the stress of caregiving, at the monthly meeting organised by ‘Care Cubed’ at Chennai

25, 26 Jul 2014 –  Participated and put up a stall in a Seva Mela on ‘Celebrating Human Rights’ organised by CIOSA at Ethiraj College for women, Chennai

23 Mar 2014 – Fund Raising Programme – ‘Medical Melodies’ – a musical evening where a team of doctors sang for our cause to help us raise funds for our Trust. Conducted at Karnataka Sanga, T. Nagar, Chennai

20 October 2012 –  A talkby Dr. Mallika on ‘Concept of Palliative Care’ in a meeting for policewomen organised by B Force at Police Commissioner’s Quarters Public Hall, Egmore, Chennai

09 Nov 2011 –  Talk by Dr. Mallika on ‘Overview of Palliative Medicine’ at a Rotary Club meeting at Meenambakkam, Chennai

15 Feb 2010 – Organised a press meet jointly with members of Human Rights at Southern Crest Hotel, Chennai, to highlight the need to develop Palliative Care in the State

02 Oct 2009 –  In view of World Hospice and Palliative Care Day (WHPCD) co-organised a road show by college students for public awareness in Palliative Care – inaugurated at CMBT, Koyambedu, in the morning, conducted at various places like the central railway station through the day and concluded at Elliots Beach in the evening

Oct 2008 –  In view of WHPCD, Co-organised with CAPC, a public awareness programme on Palliative Care at Music Academy. Mr. Paneerselvam, The Minister for Health and family welfare, Govt. of TN was the chief guest

07 Oct 2007 – In view of WHPCD, Co- organised an awareness programme on ‘Make Life worth Living’, along with RMD Centre and Sathyam Foundation at Vani Mahal, Chennai.

01 Oct 2006 –  Rally conducted in observance of WHPCD at Marina Beach. Talks given on Palliative Care in various schools in Chennai.

Oct 2001 –  Talk by Dr. Mallika on ‘Recent Advances in Pain Management in Cancer’ given at India Medical Association meet in Mayiladuthurai

May 2000 – First Programme on ‘Total Cancer Care’ in Chennai

2000 till 2008 – Talks given at Rotary Clubs, YWCA, conferences and various meetings for surgeons & physicians

Awards and Support from other organisations

10 February 2020 – Dr. Mallika and Dr. Thayalan were invited to the Thanks giving of Mr. K. Subashchand Kasturibai Ranka at Kalaignar Arangam. They felicitated around 60 NGO’s as a token of appreciation with donation. Lakshmi Pain and Palliative Care Trust is one amongst them.

24 Nov 2018- Dr. Mallika Tiruvadanan Received the award of ‘sevai devathai’ from Aval vikadan on behalf of the trust

17 January 2010 – ‘Friends of MMC Award’ – during 175th year jubilee celebrations of Madras Medical College honouring us for the services rendered by our organisation to patients at Govt. General Hospital, Chennai

Awareness through Media Some of our Newspaper Articles

8 March 2020- Phone interview on our trust and Palliative Care by Radio city 91.1

13 Oct 2012 – Live one-hour phone in programme to answer questions on pain relief and palliative care on Rainbow FM, 101.4 in view of WHPCD